Now, I don't know if this is a plan for all state parks with camping facilities, but we just camped at Governor Thompson State Park in Northeast Wisconsin and the shower and flush toilet facilities were amazing!
Governor Thompson State Park is fairly new as it is (established in 2000), but since camping there last week, I have also heard that Wyalusing's new facilities are the same.
I almost felt like we were cheating because these bathrooms and showers were so nice... but now it is going to be hard to go back to your typical pit toilets or showers you have to pay for at other campgrounds. 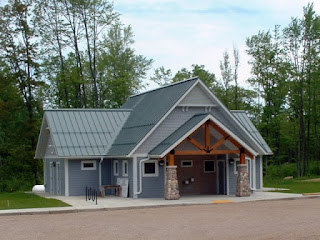 The building is a large square, and in the front are normal mens bathrooms to the left and women's bathrooms to the right. Around the outside of the building are 7 individual bathrooms that contain a shower, sink, mirror, benches, and a flush toilet. There are 2 handicap accessible rooms. When the room is being used there are locks that say in gree -"vacant" or red for "in use."
The shower, itself, requires no money, has one temperature setting at a nice warm flow and you push one single button for a high shower head and another button for a lower shower head -- yes, two shower heads! They run for a few minutes and stop automatically. If you aren't finished, just push the button again. Each individual bathroom was as big, if not bigger, than a typical home bathroom. I was able to bring my kids in and have them sit on the bench while I showered and got ready. With the number of showers available, you didn't feel rushed, and I could even blow dry my hair. (again, camp cheating:)
I'd love to hear from you if you have encountered these new facilities at other state park campgrounds in Wisconsin!
at 6:49 AM 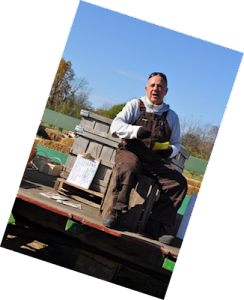